Dracula's Castle, Brasov, Sibiu, Peles Castle... Get lost in legendary Transylvania on this two-day guided tour of Romania's most iconic sights from Bucharest. 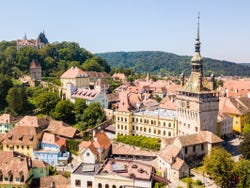 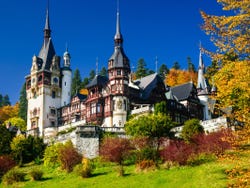 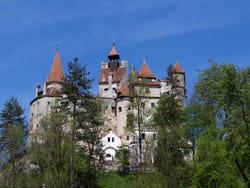 After being picked up first thing in the morning from your hotel in Bucharest, you'll leave the Romanian capital behind and make your way north, delving deep into Transylvania: from the "Paris of the East" to the "Land Beyond the Forest".

Following a journey of around two-and-a-half hours by bus, you'll make the first stop on your tour of Romania. You'll visit the small town and mountain resort of Sinaia and its famous Peles Castle, built between 1873 and 1914.

This beautiful architectural complex was built as the summer palace of the Romanian royal family, although these days it serves as a museum. Inside, you'll have the opportunity to discover one of the country's most important historical monuments.

Continue your route through one of the spookiest corners of Europe, reaching the mysterious Bran Castle, thought to be the castle of Count Dracula. Intrigued? You've got nothing to fear... Explore the infamous fortress on a guided tour and hear the secrets that inspired Bram Stoker to write his famous Gothic novel.

You'll then have free time to eat, before leaving for Brasov, where you'll explore the historic centre and its most important landmarks. The Black Church particularly stands out as a symbol of the city and the best example of Gothic architecture in Romania. How did it get this name? You'll find out on the tour!

Your first day will end in Sighisoara, where your hotel is located.

After breakfast, you'll head out from the hotel to discover the historic centre of the Medieval walled city of Sighisoara. Built in the 12th century and incredibly well-preserved, the town is known for being the birthplace of Vlad Dracula. During the tour, you'll visit the Clock Tower, which at over 200 feet in height (64 m) offers excellent views over the ancient citadel below.

You'll then hop back on board the bus for your next stop in Sibiu, one of the most important cities in Transylvania. In fact, it was the capital of the region between 1692 and 1791, and briefly in the 19th century. Stroll through the Grand Square, which has been at the heart of the city centre since the 15th century, and visit the Brukenthal National Museum, the oldest museum in the country; the magnificent Orthodox Holy Trinity Cathedral; and Huet Square, where you can admire the Lutheran Cathedral.

Having taken in the legendary history of Medieval Romania, you'll set off on your route back to Bucharest via one of the most spectacular roads in the world: Transfagarasan. Your tour will end back in the capital.

The accommodation in which you'll stay during this tour will be the Hotel Sighisoara, a three-star hotel. If there is no availability at this hotel, you will stay in another hotel of the same quality.

The return journey to Bucharest will only go via the Transfagarasan Highway if weather conditions allow. If this is not the case, you'll travel via a different route.

All of our providers comply with local legislation and applicable health recommendations regarding protection and safety, to help avoid the spread of Covid-19. Specifically, the provider of this tour will apply the following measures:

You can book up until 48 hours before the activity as long as there are still places. Book now to guarantee your spot.

Show the voucher on your phone to take part in the activity.

No, not suitable for people with reduced mobility.

US$ 458.80
No hidden fees or surcharges
Free cancellation up to 3 days before
Book

I travelled with small children
10

I travelled with my partner
6

I travelled by myself
10

I travelled by myself
Show all the reviews
like Free

10 / 10 1 review
Immerse yourself in the Romanian capital's past with this Free Bucharest History Tour. Discover the most symbolic buildings during the country's history.
Free!
Book
like Free

9.60 / 10 1,254 reviews
Discover the beautiful old town and the most interesting places in the Romanian capital on this free walking tour of Bucharest!
Free!
Book
like

8.60 / 10 415 reviews
Delve into the mountain landscapes of Romania on this tour from Bucharest. Explore the mystical Bran, known as Dracula's Castle and the palatial Peles
US$ 71
Book