Discover the charms of northern Bulgaria on this excursion to the picturesque city of Ruse from Bucharest. Explore ancient Roman ruins, historic monuments and a fascinating museum. 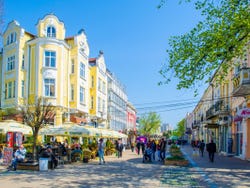 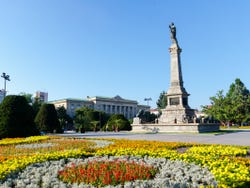 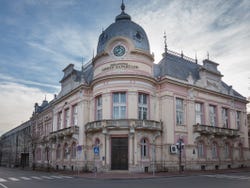 At 8:30 am on the day of your tour, we'll pick you up from your hotel in Bucharest and set off on the journey south. After an hour and a half drive, we'll reach the city of Ruse, located on the banks of the Danube River just across the border in Bulgaria.

Often nicknamed Little Vienna, Ruse is known for its elegant 19th century architecture. We'll embark on a guided tour of the city's historic centre and visit its most emblematic places of interest, like the Opera House, the library and the Monument of Liberty.

Our next stop will be at the Regional Historical Museum of Ruse, where you're sure to be captivated by the impressive artillery collection amongst other fascinating exhibitions, before continuing onwards to admire the Church of the Holy Trinity.

We'll then take a well-earned break, and you'll have an hour and a half of free time for lunch. Don't miss out on trying the local cuisine at one of the restaurants in the area!

With renewed energy, we'll next visit the ancient fortress that remains from the Roman city of Sexaginta Prista, as Ruse was historically known. Wandering amongst the ancient ruins, we'll find the old city wall and the barracks.

For the finishing touch on our tour of Ruse, we'll head to the banks of the Danube River to enjoy a peaceful stroll alongside the water. At the end of the day, we'll make the return journey to Bucharest, where you'll be dropped off at your hotel at 5:30 pm.

To participate in this activity, you must bring your passport with at least 6 months validity on it to cross the border to Bulgaria. Citizens of the European Union can present their national ID.

Hotel pick up and drop off.

Entry to Ruse Regional History Museum: Лв 12 (US$ 7) per person.

You can book up to the start time, as long as there are places remaining. Book now to guarantee your spot.

US$ 61.60
No hidden fees or surcharges
Free cancellation up to 24 hours before the service starts
Book

Free! Free cancellation up to 24 hours before the activity starts. If you cancel under this time or do not show up, you will not be refunded.
like

9.30 / 10 36 reviews
Delve into the mountain landscapes of Romania on this tour from Bucharest. Explore the mystical Bran, known as Dracula's Castle and the palatial Peles
US$ 67.30 US$ 44.50
Book
like