Built following a simple planning project based on communist policies, the Bucharest metro was a clear example of one of the improvements to citizens' lives in the city.

Like many other Eastern European metro systems, the design of the stations is simple and modern, with everything serving a purpose, and nothing there for pure decoration purposes.

The metro in Bucharest is 43 miles long (70 km), with four lines that serve a total of 53 stations. The system is currently being expanded, and in the future it should reach a length of 62 miles (100 km) with an additional 30 stations.

Line M1 (yellow): Opened in 1979, line M1 is the oldest line on the Bucharest metro system. It has 22 stations and takes a practically circular route through the city.

Line M2 (blue): This line is around 11 miles long (18 km) and connects the north of the city to the south of the city. It is the most used line in the city.

Line M4 (green): The newest line on the metro system, this was opened in 2000. It is the shortest line, connecting the north of the city to the centre, and it is the least used line in Bucharest.

The metro in Bucharest opens Monday to Sunday from 5 am to 11 pm.

Metros tend to run every  3 to 5 minutes during rush hours and every 6 to 12 minutes at other times in the day.

Metro tickets can be bought in the ticket offices and machines at the stations. Please note, they can only be used on the metro and not on the buses. 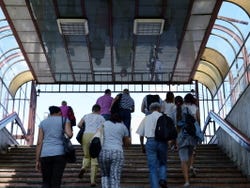