The seed was planted of having the most imposing palace in the world after Ceausescu was inspired when visiting his North Korean counterpart. The leader made the most of the confusion and destruction caused by an earthquake in 1977 to rebuild the city to his own taste.

To give his ambitions free rein, Ceaucescu did not think twice about demolishing different historical areas of the city that were in his way, including numerous temples, hospitals and factories, as well as the houses of more than 40,000 people who were stripped of their properties and forced to move.

This massive construction was built against the clock at the hands of more than 100,000 workers who were working 24 hours shifts 7 days a week. Many people lost their lives working on this building, and it is thought that many are buried under the concrete.

In order to fund the project, which cost the equivalent of 5 years worth of the country's budget, Ceausescu took on considerable foreign debt, which he easily paid back, plunging the Romanians into misery.

To get more of an idea of the sheer size of the building, it is 787 feet long (240 metres) and 886 feet wide (270 metres), with 12 floors plus and additional 8 underground floors, unsurprisingly including a bunker. It is also considered to be the heaviest building in the world!

The Palace of the Parliament is a physical reminder of one of the most important periods in the history of Bucharest, and due to that, and it's incredible size, there is no doubt that it is one of the essential tourist attractions in the city.

If you don't want to enter the parliament, a good way of ensuring that you still see it from outside and learn about its history is on a free walking tour. 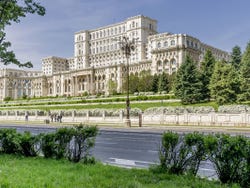 Palace of the Parliament in Bucharest 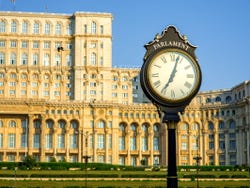 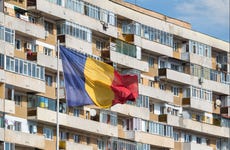 8.92 13 reviews
Free
show all the activities